Plant a tree in memory of Joel
An environmentally-friendly option 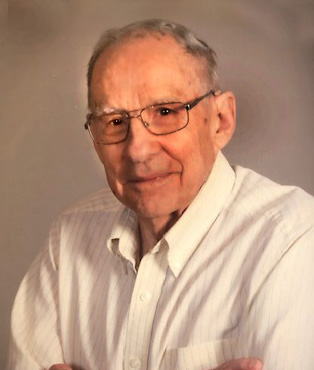 Joel Richard Klink, age 85, passed from Earthly life on April 6th, 2021, at the Classic at Hillcrest Greens, in Altoona, WI, surrounded by loving family and friends.
Joel was born in Nevada, Ohio on June 28, 1935 to Louise and Harvey Klink. He grew up in the small town with his brother, Ron, and attended the school located directly across the street from his home. Joel continued on to Ohio State University where he graduated cum laude with a Bachelor of Science degree, and in 1964 he earned his PhD in organic chemistry. Joel loved to play basketball and he was also a pitcher on his high school baseball team. He loved to run and he was able to share that passion later on in life with his son, going on to win many races. He would turn his attention to bicycling, taking rides across Minnesota to raise money for Multiple Sclerosis.
On June 21, 1959 he married JoAnn Schilling at the little white church on the Lincoln highway near Upper Sandusky. In 1963, the couple moved to Eau Claire, Wisconsin where Joel began his 34 year career of teaching organic chemistry at the University of Wisconsin at Eau Claire. It was here that he was able to impact the lives of students and staff through his teaching and desire to make a difference in the students' lives. Joel was known for his patience and compassionate demeanor.
Joel and JoAnn adopted 2 children, a son, Brian in 1965, and then a daughter, Cara in 1970. He cherished family and the love that the family unit provided.
He loved duck hunting and fishing, and later learned to be an avid bird watcher. Both he and JoAnn had a strong passion for nature and the out-of-doors. They spent hours exploring the waters of Wisconsin by canoe and sharing their knowledge of nature with anyone who was willing to join in their excitement of life and the possibility of drawing closer to nature. Joel also took on sailing during his time in Eau Claire, building a sailboat with a colleague and teaching his children how to navigate the rudder and call the sailing terms as the bow shifted to compensate for the wind and direction of the boat.
Joel was also very dedicated to his church and the community that made up the church. He was active in the choir and the mens' covenant group, he served on several committees, and acted as moderator for a term. He also enjoyed being an usher on countless Sundays. He formed deep roots at the First Congregational United Church of Christ, and the spiritual community was a big part of what made Joel happy.
In his retirement years, Joel loved golfing and making clay whistles. He spent hours shaping, crafting and creating clay figures to share throughout the Chippewa Valley. He had a special love for watching children play and greeting them with a smile, a wave, or a simple gift of a flower or a clay whistle. Joel wanted nothing more than to have his family surrounding him and his selflessness towards everyone he met would shine throughout his entire life.
Joel was preceded in death by his mother and father; and brother Ron. Survivors include his wife JoAnn; son Brian (Amy); daughter Cara; grandchildren Alex, Amanda, Anna, Dane, and Madeline; great-grandson Jayden; sister-in-law, Bonnie Klink; two nieces, Melissa and Michelle; and other extended family members and friends.
A private service for the family is being held in April, and we hope the community will join us for a memorial service sometime in the fall of this year.
Memorials can be sent to First Congregational Church of Christ, 310 Broadway St., Eau Claire, WI 54703, or if you prefer, to Beaver Creek Reserve, S1, County Highway K, Fall Creek, WI 54742.

Plant a tree in memory of Joel by clicking here.
To send flowers to Joel's family, please visit our floral store.

A service summary is not available

Plant a tree in memory of Joel
An environmentally-friendly option

Plant a tree in memory of Joel

1 tree planted in memory of Joel

JoAnn, please know our thoughts and prayers are with you and your family during this sad time.

Another one of our favorite UWEC professors has passed. My wife’s favorite chemistry professor. One of my favorite people from First Congregational. Always busy volunteering. A really fine athlete who I played in the church softball league with. Our thoughts and prayers are with you JoAnn and family. Joel left a mark on all.

Plant a tree in memory of Joel